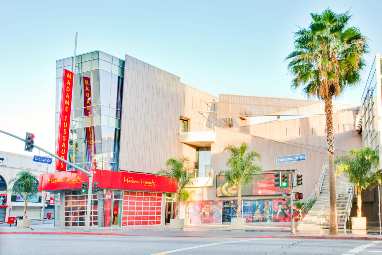 Hollywood is a district in Los Angeles, California, located about 125 miles north of San Diego. It is the historical center of the movie studios and movie stars of the American cinema. The favorable climate in Southern California was perfect for the film industry, so by 1915, most major films were being made in the Los Angeles area. The Hollywood Walk of Fame was created in 1958 to honor actors, artists and other significant contributors to the entertainment industry.

In 1985 the Hollywood Boulevard Commercial and Entertainment District was officially listed in the National Register of Historic Places, ensuring these key buildings will be preserved for future generations. While many major film studios have moved to other areas within the greater Los Angeles area, Paramount Pictures is still physically located in Hollywood California. You can enjoy a Hollywood studio tour at Paramount Pictures, Universal Studios and other nearby LA studios.

North Hollywood is home to the NoHo Arts District. Universal Studios is on the border of Hollywood and North Hollywood. West Hollywood includes the famous Sunset strip, full of restaurants and nightclubs. Nearby is Beverly Hills, home to many Hollywood movie stars and expensive shopping in the boutique stores on Rodeo drive.

The Hollywood Walk of Fame has over 2400 stars embedded in the sidewalk along Hollywood Boulevard in Hollywood, California. This popular Hollywood attraction receives over 10 million visitors a year. The Hollywood Walk of Fame stars include actors, musicians, directors, producers, music and theatre groups, fictional characters (like Mickey Mouse) and others who have made significant accomplishments to the entertainment industry. Your California vacation should include a trip to see your favorite star. 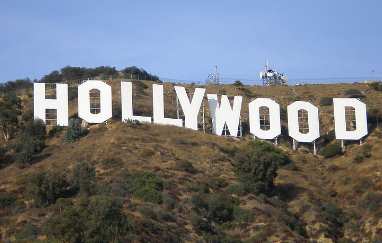 The famous Hollywood Sign sits in the hills above Hollywood, and is one of the most famous signs in the world. A frequent question is “What is the best place to see the Hollywood sign?”

If you are visiting downtown Hollywood, stop by the Kodak Theater, home of the Academy Awards, and you can view the Hollywood sign on the hills in the distance. The theater is located at the corner of Hollywood Blvd. and Highland Ave.

The annual Hollywood Christmas Parade is held on the weekend after Thanksgiving. The 3.5 mile route goes down Hollywood Boulevard.