Best Yosemite National park camping sites. Go tent or RV camping in Yosemite California for your next vacation. Yosemite National Park offers a number of campgrounds for camping. Some require advance reservations, while others are first-come, first served. For other lodging such as hotels, cabins and Bed and Breakfast, see Yosemite lodging.

Yosemite is one of the most beautiful places in the world! I think the best way to enjoy this outdoor wonderland, is to experience it by camping in Yosemite.

There is a 30 night camping limit in Yosemite National Park each calendar year. During the popular season from May 1 - September 15, camping stays in Yosemite is limited to maximum of 14 nights, and only seven of those nights can be in Yosemite Valley or Wawona.

Note: Each year, the dates vary, so these are approximate dates in the table below. If there is a lot of snow, that may delay the opening of some of the campgrounds.

2. Can I sleep in my car? Unless stated otherwise for a particular campground, sleeping in vehicles is not permitted at any Yosemite campground, a never anywhere else in the park.

3. When can I check into my Yosemite campsite? Check-in time is noon.

5. How much does it cost to camp at Yosemite? The Yosemite camping fee is approximately $12 - $26 per night, depending on the campground, except for camp 4, which charges a small fee per camper.

6. Are the roads open? - Yosemite roads may be closed due to the weather, snow conditions, renovations or storm damage. Access varies by season. Always check before you plan your trip. Tioga pass is closed during the winter.

7. Where is Yosemite? - Yosemite is located in northern California, about 165 miles east of San Francisco, 280 miles north of Los Angeles, and 400 miles north of San Diego California. For more details see map of Yosemite.

8. Are reservations required? - Reservations are strongly recommended, as the campgrounds fill up during the busy season, typically April through October. Below you will find the specific requirements for each campground. 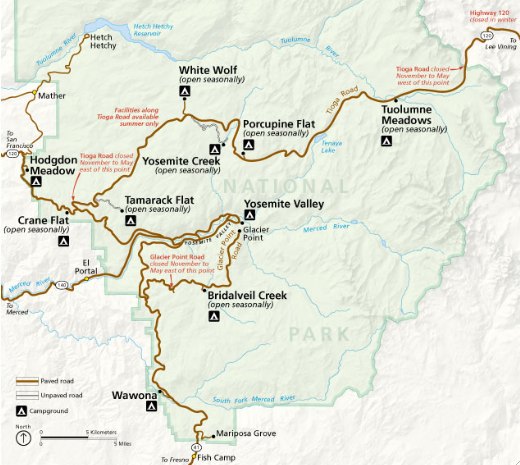 Yosemite Valley is the most popular location for Yosemite National Park camping. There are 3 campgrounds for tent and RV camping that require reservations during the summer months. One of these, Upper Pines campground, is open all year (weather permitting). Camp 4 is a first-come, first-served walk-in campground, popular with rock climbers and backpackers.

There are two campgrounds south of Yosemite Valley for more great camping in Yosemite.

The Wawona campground is located near the Wawona area and Mariposa Grove of Big Trees.

Reservations may be required when camping in Yosemite National Park, based upon the campground and in some cases, the season.

To make Yosemite camping reservations, call 877.444-6777 or visit their website at www.recreation.gov

Reservations should be made well in advance of your arrival date. Check the schedule below to see when is the first day that you can make reservations (starting 7 AM Pacific Time)

Note the Wawona group site has additional reservation due dates for the winter months between December and March.